For certain Broadway roles, some stars go past the point of no return to get the part.

For Ali Ewoldt, who was recently cast as the lead in the latest production of “The Phantom of the Opera” which started in June, the part of Christine was a dream come true for the actress who once played the role of “Little Girl” in the Westchester Broadway Theatre production of Yestin and Kopit’s “Phantom”.

“I remember I got to sit backstage and watch all the professional actors do their thing, and witness and hear them over the speakers,” Ewoldt told Kollaboration New York about her first experience in theater performance as a child. “From there, I fell in love with performing and the role of Christine.”

It was then when she was living in Westchester County, New York at a young age that Ewoldt knew she had a passion for the performing arts.

“I was always dancing around as a child so my mom put me in dance classes when I was young,” Ewoldt said. “I also started taking voice lessons when I was about 10 years old.”

Around that time, Ewoldt’s aunt and her parents would take her to see Broadway shows in New York City and when she saw the Andrew Llyod Webber production of “Phantom of the Opera”, it reignited her love for the role of Christine.

“After that, I performed in public school in middle school and high school,” Ewoldt said. “All that time, I still continued taking voice lessons.”

Ewoldt explained that when it came time to choose a major in college, she decided to attend Yale University and major in psychology since she wasn’t sure if theater performance was a stable career path, but wanted to be able to concentrate on academics and find something she was similarly passionate about.

However, that didn’t stop her from becoming involved in the musical theatre community at her university.

“Of course, I performed all the time when I was there too,” Ewoldt said. “I was involved in all sorts of musicals from strange experimental operas, dance pieces, weird new plays, and all sorts of interesting things.”

Right before Ewoldt graduated, she had a small part as a soprano on “Marriage of Figaro” with the Yale Opera program when one of the other singers introduced her to an agent from New York City and she auditioned for the agency and they took her in on a trial basis. 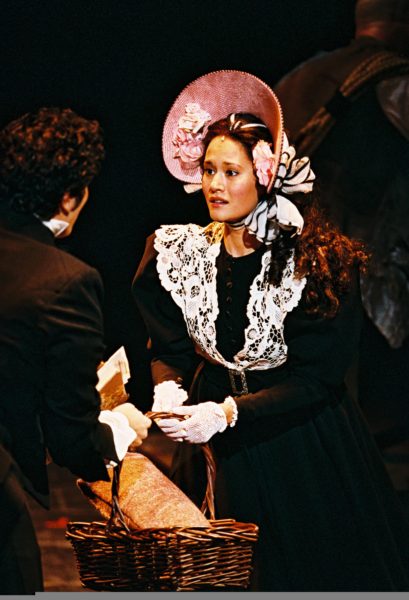 Her first major gig was as Jasmine in “Aladdin” at Disney’s California Adventure. From there, Ewoldt’s theater career took off and since then has had the opportunity to perform all over the world, from Japan to France and has starred in various productions of different musicals including “Les Miserables” and a U.S. Tour of “West Side Story”. Before the current production of “Phantom of the Opera”, Ewoldt finished a revival of “The King and I” at The Lincoln Center and at the Lyric Opera of Chicago.

On being the first Asian American to portray Christine on Broadway, Ewoldt said being able to represent the Filipino American community and contributing to more diverse casting in the theater world is an exciting honor.

“It’s a big deal,” Ewoldt said. “I’m certainly really proud to be Asian American and to be playing Christine in “Phantom” on Broadway. I feel a responsibility to do my role well and to perform the part to the best of my abilities, and to continue to show whoever is watching that it doesn’t matter what ethnicity Christine is, but she can still sing the songs, tell the story, and be honest and true with the other characters.”

Ewoldt said because the Asian American performing community is small and supportive of each other, it has given her the opportunity to meet and work with other Broadway actresses that inspired her growing up.

“When I was a kid, I saw Lea Salonga in “Les Miz”, and of course, being Filipino, I grew up learning about all things Lea Salonga and I’ve been able to work with her and now she’s a friend of mine which is still a little bit surreal,” Ewoldt said. “It was incredibly inspiring both because she’s amazing and because she played a role that wasn’t specifically Asian in a huge Broadway musical and it’s a part that everyone wants to play because it’s the coolest character.”

She also looked up to DeeDee Magno Hall who she eventually worked with as well.

“I remember I was watching the Mickey Mouse Club and she was one of the mouseketeers and I kept thinking that she was Filipino too,” Ewoldt said. “And then I got to work with her in “Aladdin” and she could not have been more lovely and gracious and talented.”

So far, Ewoldt said she has heard positive feedback about her performance as Christine from other fellow actors in the Asian American community and is lucky to have cracked open a new opportunity that perhaps many people didn’t believe was possible before.

“I’ve already heard from friends who have told me that their niece, cousin, daughter, or their student is inspired to take work and train, and take voice lessons so they can be Christine someday too which is really amazing and powerful to hear,” Ewoldt said. “It’s a part that I’ve always dreamt of playing and I concentrated on singing the songs well and acting the scenes.”

“It is sort of something that is bigger than just my own dreams for the role,” she added. “It means something to the greater community.”