Designer Lisa N. Hoang breaks into the fashion industry at a young age

New York Fashion Week is one of the biggest events in New York City for designers to display their collections for the season. NYFW is not only an event for many returning famous designers, but also an opportunity for designers on-the-rise to build their own reputation on the runway.

Lisa N. Hoang is an Asian-American fashion designer who knew at a young age she wanted to get into the glamorous fashion world, and that’s exactly what she did. Hoang landed her first fashion internship at the young age of 14. Now at 22, she displayed her latest designs in NYFW Fall 2016.

In an interview between KNY and Hoang, she discusses her passion for the fashion industry and opens up about the challenges she’s faced as a designer.

What inspired you to get into fashion?

Lisa N. Hoang: It’s something that I always wanted to do when I was younger and I didn’t know I was really going to do it until I actually went to college. For the first year I majored in textile engineering and decided I completely hated engineering but I loved textiles. Continuing on the textiles route, I got to major in fashion textile designs and as I got more exposure to the industry, I just fell in love with it and knew that it was something that I wanted to do forever.

Can you describe what it was like to break into the fashion industry at such a young age?

LNH: I think at such a young age, the age is the biggest obstacle you do face. Because of my age I think a lot of people were concerned when meeting me. They thought I was an intern or an assistant, and had to check if I was the actual designer. Meetings became really awkward and you kind of just get over that. Age is definitely a big obstacle because that’s all they see, and you have to go the extra mile to prove yourself. Definitely NYFW was a challenge, because nobody expected me to be so young and still be in school.

You’re 22-years-old and already achieved your very first NYFW! Can you describe what your experience was like during the event?

LNH: It was so surreal. I didn’t know what I was getting myself into. I got myself here on my own. I’m a pretty aggressive person in my career because I know what I want. So I did NYFW without really thinking what that would entail. It is very hectic. It’s true what they say; New York is the city that never sleeps. I’ve put in many hours preparing for the runway up until the show. NYFW was just a different planet on its own. It’s its own world, and people don’t understand all the work and all the moving parts that are involved in fashion week. People come to see the show that’s over in 15 minutes, and may not be aware about how much work actually goes into the show.

You pulled it off and you’re collection looks amazing! Can you describe the overall style and design for your collection? 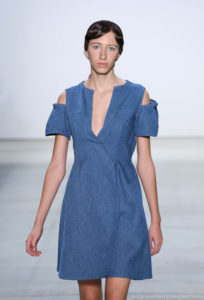 LNH: This past collection was very romantic and it really catered to the modern woman. We try to have it all. We want to work, we want to have a family, we want to have a social life, and you don’t always get the opportunity to do it all of it. But you want to do as much as possible. I created a fluid line of transitional pieces that would be good for the office; you can take pieces off and go out at night. But these pieces were also meant to approach sustainability, in a different way. By not just the materials but approaching it in a way that it’s a staple piece for your closet, where you can wear the piece longer, and decreasing impact on the landfills. Annually we throw away 60 billion tons of clothes in landfills. I wanted a collection that could be the staple pieces for your closet. All my pieces deconstruct to individual pieces.

How has your Asian American culture influence your choice to pursue being a fashion designer?

LNH: My culture at first made me not want to do fashion design, that’s why I studied textile engineering for the first year and a half of college because I wanted to please my parents and be an engineer or doctor. That actually pushed me away from fashion than towards it. After awhile I realized I wasn’t happy and my true passion did lie with fashion, so I went for it. I would say my culture didn’t push me towards my career, but it did give me my ethic and drive because I’ve seen how hard my parents have worked to give me the life I have. My work ethic definitely comes from my mom.”

What’s your overall opinion about Asian Americans in the fashion industry?

LNH: I think the Asian American is very significantly represented in the fashion industry, because of designers like Alexander Wang and Vera Wang. You have a lot of Asian American designers that have proven they are at the top of the trade. I don’t think there’s an issue there, but when it comes to me I’m a designer myself and there’s no diversity. But in New York I think the reality is Asian Americans are dominant in this industry.

I think NYFW in September is me establishing myself as a brand, and as a real designer and simply not an emerging designer. Leading up to NYFW, everyone saw me as that student designer. Being able to showcase at the main stage at NYFW really gave me credit to my reputation as a designer.