Sometimes you just have to go for it.

On the evening of May 6th, the building located on the 400 block of New York City’s West 18th Street, seemed fairly unremarkable. However, as I drew closer, I noticed a group of security guards in long black suits forming a protective wedge around a seemingly inconspicuous entrance. I started to get nervous.

Just a few weeks earlier I had moved to the “Big Apple” to pursue a long overdue career in writing and non-profit. And of course my first assignment was HBO. The Game of Thrones HBO! At that moment it hit me. I was no longer in the Midwest.

The invitation stated that it was a VIP panel and discussion for the fifth installment of HBO’s critically acclaimed documentary East of Main Street:Taking the Lead. As I neared the entrance, I was greeted by the sight of actor Jimmy O. Yang hopping out of an Escalade ― and sauntering through the wedge of security guards like he was Odell Beckham Jr. knifing rudely through the Dallas Cowboys secondary.

Needless to say I didn’t follow Jimmy. I waited in line. And I waited some more. Finally, our group was given the go ahead. When it was my turn, I nervously gave the security guard my name. He smiled at me calmly, “You’re so official, you’re on the list twice.” Whoosah….

After the confidence booster, my eyes drank in the scene of my very first New York City party. It was an absolute cluster you-know-what. Photographers were flocking to the left of the room attempting to cram in final shots of posing cast and panel members. Next to them, a DJ was spinning a mixture of hip-hop, dance, and house music. In the center of the room, guests were tearing each other apart to get at the catering for the night ― which featured powerhouse NYC restaurants: Baohaus, MokBar, Jeepney, and Dosa Royale. Only at a HBO party celebrating Asian-American and Pacific Islander Heritage Month could the food be as well known as any of the people attending it. Instagram anybody?

My time for enamoring ended abruptly, as I remembered my main objective ― to interview people. A quick survey of the crowd offered no familiar faces until I noticed Jimmy O. Yang once again. Since I was familiar with his work and had prepared a few questions― I decided to seek out an introduction. He was more than gracious and even offered to sit down for a few moments to “Kollaborate.”

“Listen, you’re not going to make everybody happy, so you have to go in with that mindset,” said O. Yang. “I grew up playing the violin and ping pong [shrugs]. I don’t try to create stereotypical jokes, but if something is funny ― I don’t really care.”

He was even willing to share a few of his assimilation experiences as a teenage immigrant from Hong Kong. Specifically ones related to hip hop and rap.

“I listened to everything!” exclaimed O. Yang. “Mystikal, Snoop, Big Tymers… I think the more gangster it was the more attracted I was to it. I would pay close attention to the lyrics when I was learning English. And I figured if I could understand what [the artists] were saying ― the rest of English would be easy.”

Fresh off my interview with Jimmy O. Yang, I decided to seat myself at the end of the second row for the showing of the documentary. Within minutes I was interrupted by a middle aged fellow attempting to acquire premium seating for himself and his date. I begrudgingly agreed to their polite request to “squeeze in” next to me. A few seconds later, I realized the “middle aged fellow” was actually renowned Wall Street Journal columnist Jeff Yang.

So there I sat. A few weeks removed from my Midwestern cocoon ― about to view an HBO VIP screening in New York City ― and Jeff Yang was practically and figuratively sitting on my lap. Interesting…

Kollaboration New York: “Was there anything you weren’t able to include in the documentary that you wished you could have ― or if you were to do this type of documentary again ― would you do anything differently?

Jonathan Yi: “Yes, there was a lot of stuff that did not reach the final cut. We had to keep editing it down into about a 30 minute window because we were worried about holding people’s attention. I wish I could have followed the cast around for years, but that just wasn’t feasible.”

Louis Tancredi: “We weren’t trying to create some Michael Moore documentary. I don’t think we were trying to hit Hollywood over the head with it. We had variety of stuff in there, including some comedy, which I really liked.” 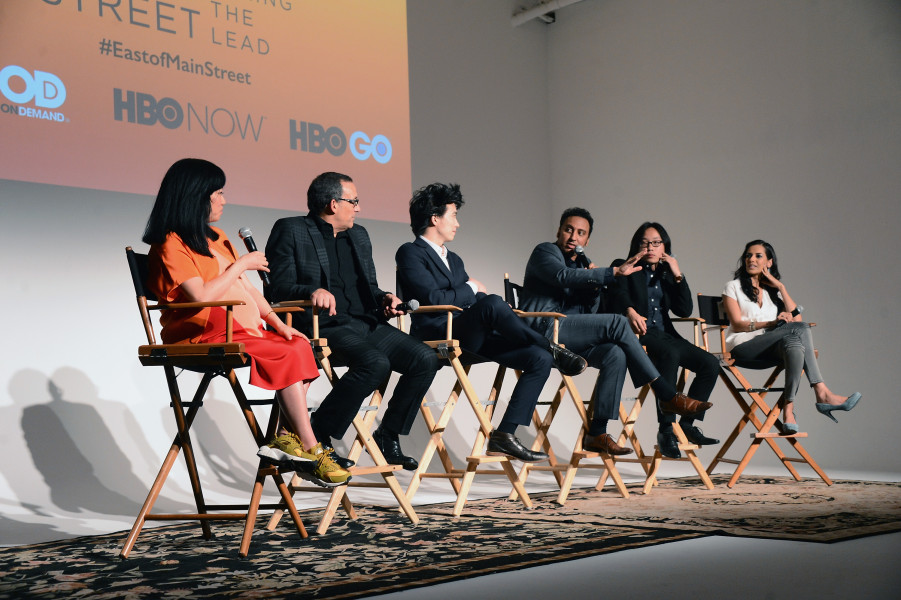 At this point my nerves had regressed slightly, and I was starting to feel more confident. So naturally, I decided to peruse the open bar that was relinquishing adult beverages of traditional AAPI preference ― Heineken and Hennessy V.S.O.P Privilege.

At the bar, I managed to reciprocate a friendly “Wassup bruh” ― with the ever present Jimmy O. Yang. From there, I engaged in cordial conversations with Sheetal Sheth, Jonathan Yi, and Louis Tancredi. These discussions ranged from the honor of working with HBO ― to the general sense of fulfillment garnered from the evening.

Even though all the conversations were rewarding in their own right, I decided to wait patiently to flag down Minya Oh ― the long time hip-hop journalist and personality ― also known as Miss Info.

“Yes! I was able to relate to what [O. Yang] said in the documentary,” explained Oh. I think more than anything it was the raw emotion. I remember being a little Korean girl lying in bed listening to NWA. And while I couldn’t necessarily relate exactly to what they were going through ― I could relate to their emotion.” 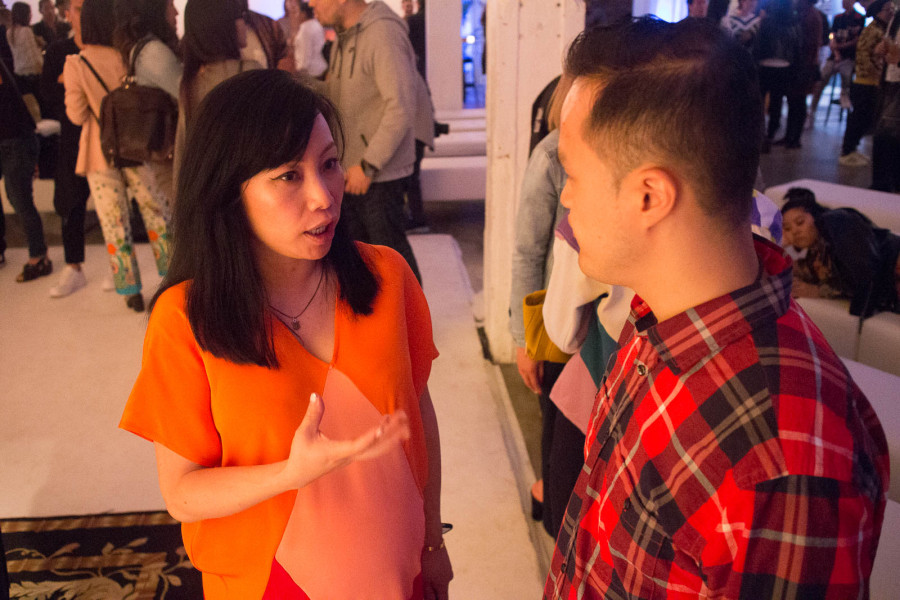 After speaking with Miss Info, I was floating around with a sense of satisfactory achievement, when I magically bumped into Jeff Yang again. This time I was more formally introduced, and he delivered a few concluding thoughts.

“Despite the fact [the cast] had unique experiences, they also had a universality and a commonality of experiences as well,” pronounced Yang. “And to me that showed that everything has changed ― and nothing has.”

He elaborated further, “We are the only place on Earth where the kind of diversity from around the planet gathers and creates a unique ― unanimity of a difference. And this show represented it. The Asian-American experience is not monolithic.”

As I was scrambling to put the “Tao Jones” ideas into perspective ― my thoughts were flooded with recurring visions of past experiences ― and the resulting life-long struggle to obtain a sense of individuality.  However, my personal musing’s dissipated with the sudden re-appearance of security ushering folks to the door. It was made clear we-did-not-have-to-go-home, but we-had-to-get-up-out-of-there.

“I was really empowered by [the documentary].” Yang quickly added. But then he paused for a second and voiced in a more somber tone, “But at the same time it shows how far we still have to go.”