“Monday” follows a day in the life of Kwan (portrayed by Kevin David Lin, in his acting debut), as he hustles drugs and weapons and navigates through the streets of Los Angeles. Through his eyes, the audience meets a variety of characters and sees the diversity and class that makes up the city in which the protagonist resides in.

This Saturday, Thai will be screening the movie at this year’s Asian American International Film Festival in New York City as a part of the “When Life Gives You Lemons” program, and Kollaboration New York had the opportunity to speak with him prior to the festival about what inspired him to become a filmmaker, the process behind creating “Monday”, and the importance of Asian American representation.

Kollaboration New York spoke with Thai about what inspired him to become a filmmaker, the process behind creating “Monday”, and the importance of Asian American representation.

Can you tell me a little bit about yourself, and how you initially got into filmmaking? What made you interested in it?

Dinh: To be honest, after making a really terrible short in college, which I never finished I focused on commercial directing.  Over a twelve-year period I was commissioned to direct about seven or eight projects.  I’m not taking the time to count.  My work was just simply not that good, but I was lucky enough to survive mainly as a promo editor, which ultimately gave me opportunities to criticize footage and develop my sensibilities as a director.  It wasn’t until about five years ago my curiosity for filmmaking started to rise again.  I met two of my best filmmaking friends Gregg Furuoka and Fidencio Casas, solely just being an observer of their process gave me inspiration to do the same.  I then reconnected with an old friend, Josh Falcon who invited me to start our production company, Art and State giving us chances to create adverts for ad agencies.  These two events are the sparks, which led to the creation of our award-winning short film- the former being the urge and the latter being the resources.

The premise of your short film “Monday” is so intriguing and it deals with a lot of interesting and heavy themes. I read somewhere else about how you originally wanted it to be a comedy, but that shifted while you were making it. Without giving too much away, can you talk about what inspired the story behind your film, and can you talk more about how the genre changed while you were in the process of making it?

Dinh: The original idea was just a quirky farce that I jotted down years ago, but after unsuccessfully writing a high-concept short this old idea popped in my head and I ran with it. It took me about three days to get a first draft and about a month to evolve into what it is today. During the writing process I injected experiences from my past and present, trying to fulfill the racial undertones that I’ve been through as an Asian American immigrant. These influences naturally transformed the story into a more dramatic tone. As for the illegal activities, I’ll plead the 5th on that.

“Monday” placed first in HBO’s inaugural APA Visionaries Contest, which is an incredible honor. Congratulations! And it premiered at the Los Angeles Asian Pacific Film Festival. This weekend, it’s premiering at the Asian American Int’l Film Festival here in New York City, which we’re all very excited for! How has the film festival circuit been so far? Is this the first time experiencing being featured at festivals?

Dinh: Yes, this is my first festival run and it’s been a priceless experience- learning, researching, submitting, attending and meeting a colorful batch of new friends. When we submitted the short to the contest we didn’t expect anything to happen. So when I was informed about the win back in January I was jumping out of my skin, but unfortunately I had to keep the good news a secret until HBO made an official announcement. Those three weeks were filled with so much anxiety. In late January for our viewing party I hoped to replicate my sense of excitement and anxiety by hiding the news inside a bunch of fortunes cookies. The idea was to slowly let people find out, but make them keep it a secret until everyone got a fortune cookie.

We’re honored and privileged our film has been celebrated by HBO and it’s incredible to be part of this Asian American film community. If anyone reading this plans to attend the screening, please come and say hello! I’d be happy to chat with you. 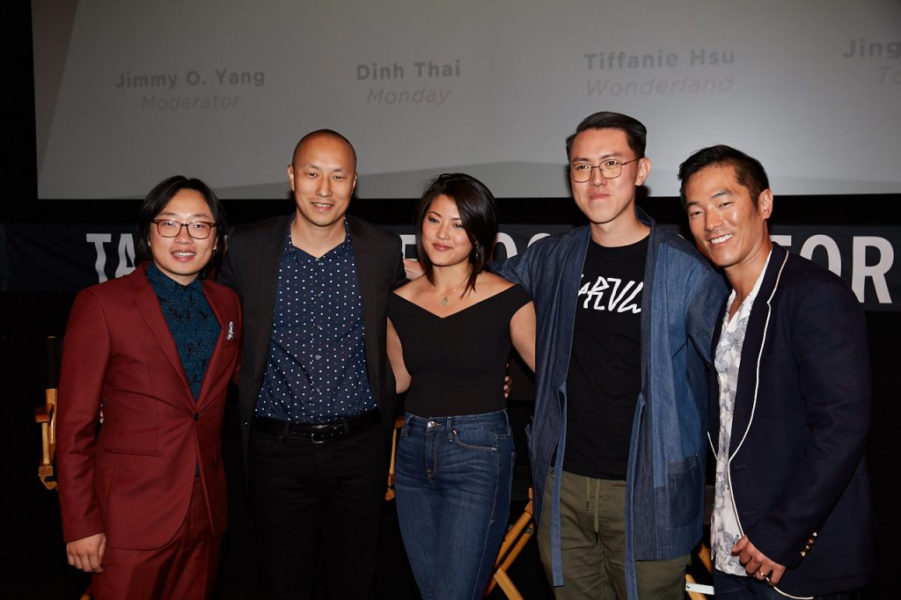 Within the last couple of years, there has been a lot of discussion surrounding Asian American representation in film and the arts. Why do you think it’s so important for Asian Americans to be able to tell their stories and to be represented in the media in an accurate and honest way?

Dinh: I think when any culture is misrepresented it gives us an opportunity to swing the pendulum back the other way. Some battles can be won through expression and art. I’m thankful that America is so divided right now, because I hope this fuels all Americans to sound off and create.

What is something you want your audience to take away from your film after they’ve watched it?

Dinh: Collectively, the cast and crew want the audience to be entertained as they watch a character break stereotypes while interacting with caricatures of society and culture. There are a couple of moments in the film that were purposely revealed a certain way to test the audience’s level of assumption, i.e., your instinctual prejudice. For example- in the opening scene, ask yourself what kind of person did you imagine talking on the phone?

Lastly, without sounding self-promotional, if people have seen the film we’d like to invite them to share their experiences with us on Facebook and Instagram and talk about it on social media. We’re hoping to turn the short into a TV series so any type of grassroots promotion will help our cause. I mean, how else is an immigrant Asian-American ever going to get a TV show made in America?