For families across America, trailers have become as important as the feature film itself. Pixar has easily one-upped these glorified commercials since the release of Toy Story 2 with their famous Academy Award winning short films, such as For the Birds. The release of their latest feature, Good Dinosaur, includes the debut of the Pixar artist, Sanjay Patel, as the director for Pixar’s newest short, Sanjay’s Super Team. With films like A Bug’s Life and Toy Story 3 under his belt, this film, which was inspired by the director’s childhood and Indian heritage, will certainly be one of the best shorts to date.

Patel, who grew up in California to immigrant parents in the 1980s, was always caught between two worlds of trying to find his place in America and understand his Hindu faith. Sanjay’s Super Team explores how these two worlds can come together in harmony.

At the beginning of the short, little Sanjay is seen sitting in the living room of their home watching a superhero cartoon while his father is on the opposite side, kneeling by a prayer shrine ringing a bell, summoning Sanjay for their daily prayer ritual.

As they start to pray, Sanjay’s mind begins to drift into a daydream full of bursting and vibrant colors where he imagines himself fighting villains and bad guys alongside Hindu gods. By the end, the short comes full circle when he seems to find common ground with his father.

Patel said he tried to make the concept of the short as accurate to his life as possible, from his obsession with cartoons to his father’s actions.

“I still remember how for several years my father would ring the bell to do a prayer twice a day, every day,” Patel said. “When I was growing up in this country, I was always conflicted and felt a little ashamed of my Hindu faith until I was much older. While not necessarily everything in the film is true to life, the concept is very much accurate.”

It was that love for cartoons that resulted in Patel becoming more interested in art and drawing. However, as he got older, Patel noticed the lack of diversity in American television; there weren’t many characters that looked like him or his parents. 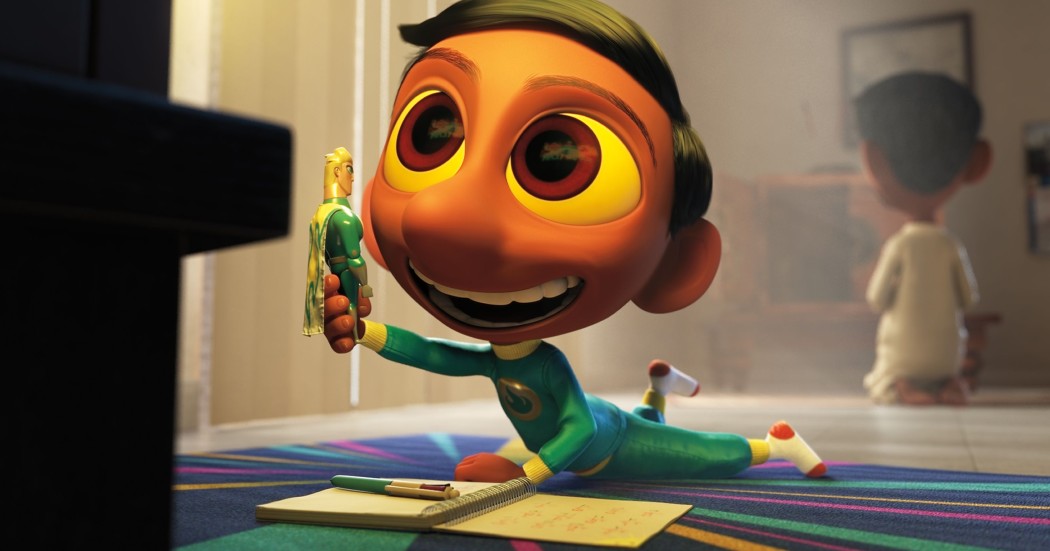 The protagonist of the short, Sanjay, watches cartoons on TV.

Nicole Grindle, producer of Sanjay’s Super Team, said Patel did a lot of his own work outside of Pixar starting in the 2000s, such as writing and illustrating children’s books about Indian mythology and Hindu faith in a more modern and contemporary way.

“Patel used a lot of the things and skills he learned from art school and Pixar to create these children’s books,” Grindle said. “He has had his artwork featured in exhibits in different museums in California.”

It was those illustrations of Patel that landed him his movie deal. John Lassester, the founder of Pixar, saw Patel’s drawings at a children’s museum exhibit and wanted him to make a film out of them.

Because it took such a long time for Patel to feel comfortable with his identity and to appreciate his roots, he was initially hesitant about making the film.

“I was pretty scared of taking the step,” Patel said. “To actually make and direct a film about my parents, about our culture and exposes who we are to the world — it’s kind of a scary thing.”

Sanjay’s Super Team is the first film produced by Pixar that explores Indian American culture and characters. While Patel hopes the theme will speak to the Asian demographic, he wants it to be a movie that everyone from different backgrounds can enjoy and learn from.