Last month the masses descended upon the Northside Festival, in the Williamsburg and Greenpoint neighborhoods of Brooklyn, like the carnivorous zombie horde’s in The Walking Dead. Between June 8th and 14th, the film, tech, music and art junkies flocked to see their favorite upcoming artists and innovators. Others just came for some good conversation, beer, and outdoor live music. Either way, Northside attendees, performers, and speakers alike experienced a vibrant environment of diverse participants in its seventh year in existence.

That diversity was put on display mid-week, as the festival featured a heavy influence of Asian-American & Pacific Islander innovative speakers such as Grace Choi from Mink, Alex Chung from Giphy, and more.

Stephanie Foo, a producer at the weekly public radio show This American Life, spoke on a three person panel on June 11th, with Ari Kuschnir and Bianca Inga Giaever. The discussion focused on the joint development of the award winning Videos 4 U series, and the different obstacles in creating its inaugural episode I Love You.

The panel also swapped stories on working with creative legend Ira Glass, and even shared a teaser for the upcoming second installment of Videos 4 U. However, due to the panel’s request to withhold spoilers, the preview will remain shrouded in secrecy.

As the weekdays gradually transformed into the weekend, film and tech speakers gave way to the visual artists and musicians ― in the form of the popular Williamsburg Walk between McCarren Park and Metropolitan Ave.

Among the visual artists who braved projected thunderstorms, was local artist and first time Northside participant Connie Fu. Her “Welcome to the Conversation” interactive art project was a popular attraction throughout the day. 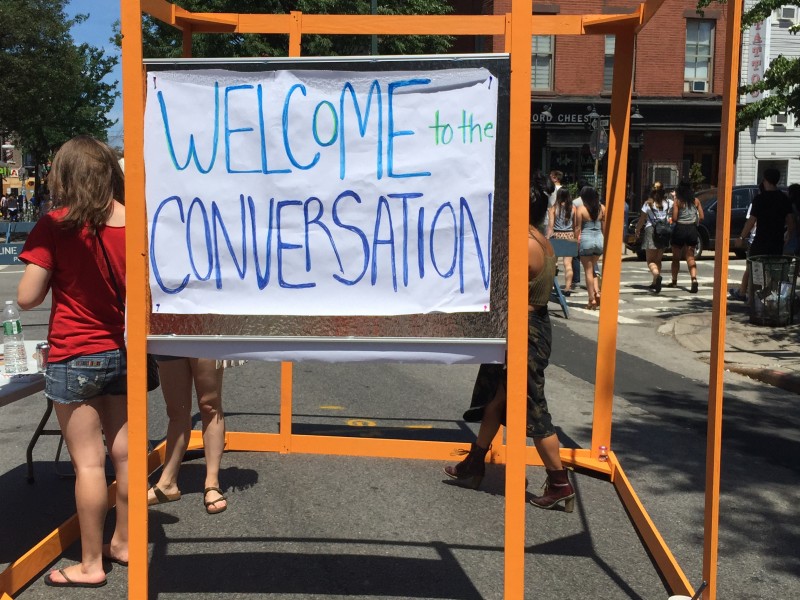 “The most enduring and basic act of human connection is the conversation.” said Fu. “Ultimately, the installation was set up to facilitate several types of conversation: spoken, visual, written, and tacit.”

She even described the elaborate thought process behind the creation of her simple, but memorable “Orange Box.”

“The color of the box, Acapulco Orange, was actually chosen quite carefully from a selection of Home Depot paint swatches. I wanted a bright orange, but neither traffic cone orange nor pastel/creamsicle. Just to pop against what I figured would be a clear summer blue sky.” explained Fu.

On Sunday pure artistic desire overtook the intimidating weather concerns ― in one final impressive neighborhood block display up and down Bedford Ave.

“Yeah, I usually do vinyl but it got canceled because of the weather,” said Joohee Park, a native of Korea, who also goes by her artist name “Sticky Monger.”

“I got it from cheesemonger,” she said. “I asked my American friend if it was a cool name because my first name is so common in Korea, so I wanted a different one.”

Park, who is listed as a heavily sought out designer and illustrator, and Northfield Festival veteran since 2011 ― explained some differences between labeling oneself an artist in Korea as opposed to in the United States.

Tsutsumi who traveled to the United States when she was 18 years old, reflected on some of her American assimilation experiences.

“When I was studying in Colorado I felt more of a foreigner ― NYC is more diverse.” she said.

She also gave a positive, but firm response, when asked if her Japanese heritage influenced her artistic expression in any way.

“I don’t feel I should do more Japanese just because I am Japanese,” Tsutsumi explained.

As the final afternoon of the 2015 Northside Festival wore down, there were brief regrets of unseen innovative speakers and unheard musical bands. The sheer size of the festival had created an impossible task of attending and witnessing every desired moment. However, there was a sense of satisfaction in the continued growth of the festival’s diversity and the anticipation in its expansion in the years to come.