Blue Glaze is a student theater group at Columbia University with a focus on East Asian productions and boasts a pilot production titled Insane Asylum Next to Heaven by playwright Nick Rongjun Yu. 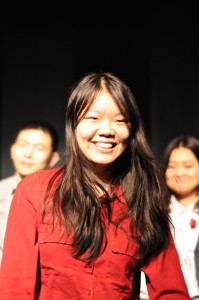 As a patron of live theatrical productions Tian Liang, the president and founding member of Blue Glaze, recalls her earliest theater experience as being part of the audience at a production of Woody Allen’s Central Park West. The play, performed entirely in Mandarin, was set against a Shanghai backdrop (Fuxing Park) and was peppered with local context. Thereon Tian came to greatly appreciate the performing arts that oftentimes are reflections on human life

To serve as a bridge between Eastern and Western aesthetics, forms, and values.

While a junior at Columbia University School of Engineering and Applied Sciences (SEAS), Tian’s appreciation for the performing arts in conjunction with a growing demand for East Asian productions on campus and a desire to bring to the stage theater that’s economically more accessible manifested itself into the theater group known as Blue Glaze. Its mission is “to serve as a bridge between Eastern and Western aesthetics, forms, and values” and “to simply produce good work”.

Since its inception, in the fall of 2014, Blue Glaze has welcomed theater enthusiasts from across New York to participate as part of its cast or crew as it did for its pilot, Insane Asylum Next to Heaven. Blue Glaze’s pilot Insane Asylum Next to Heaven was a black box production in Mandarin. An experimental modern day drama that explores themes of insanity intertwined with lighter contemporary elements. The semi-lunatic protagonist Wu So of this production was portrayed by Vincent Zheng a graduate student at Columbia University SEAS.

Life would be so much more enjoyable if I could spend a little more time on stage. 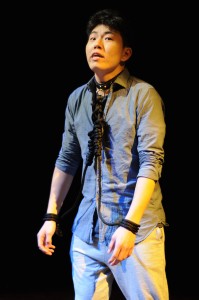 It was at a no-frills theater production of The Butterfly Lovers that Vincent as a high school student played a supporting cast member – the Servant. He recalls having delivered no more than a few lines during the entire play. However, the experience of it all struck home and to Vincent – “Life would be so much more enjoyable if I could spend a little more time on stage.”

As an Applied Mathematics major at the National University of Singapore, Vincent joined King Edward VII (KEVII) Hall Chinese Drama group that stage productions written by influential contemporary playwrights Stan Lai and Meng Jinghui. He was cast in Like Shadows where he played a myriad of roles. Some characters had lines, while the others he played did not. In Amber, he delivered a fair number of monologues as the Doctor. It was here, at KEVII Hall Chinese Drama group, that he trained as an actor and gained early stage experience.

Having never forgotten his life mantra to “…spend a little more time on stage,” Vincent as a student in New York had auditioned for an upcoming production of Insane Asylum Next to Heaven. This would be his first theatrical performance in New York and it would be with Blue Glaze.

In Blue Glaze’s production of Insane Asylum Next to Heaven, Vincent and the other actors portrayed a mosaic of human emotions and delivered an indelible performance. This student theater group has not only served as a platform for actors like Vincent to express themselves, but has opened its doors to a diverse group of talented individuals who’ve provided support from behind the curtains as part of the stage crew.

The final curtain has fallen on Blue Glaze’s pilot production Insane Asylum Next to Heaven. Blue Glaze has not only been triumphant in its mission to foster East Asian productions, but has also succeeded in putting on a production that’s affordable to its student patrons in a city where most Broadway and off-Broadway productions will cost you the proverbial pound of flesh. It was the people of Blue Glaze, like Tian and Vincent, and their collective love for theater that enabled them to see this pilot production to fruition and “to simply produce good work”.