Korean dramas have been the cause of one too many long and sleepless nights. Even with predictable story lines and cheesy plots, they can be addictive to a lot of  people. If your guilty pleasure is binge-watching Korean dramas until the wee-hours of the morning, “Dramaworld” might be the next item to jot down on your ‘To Watch” list.

The new Viki web-series, which debuts on April 16, reveals what can happen when the real world collides with the drama world. The story focuses on Claire Duncan (Liv Hewson), a 20-year-old American college student, who is addicted to a fictional drama called “Taste of Love.” While watching the story unfold, Claire develops a strong crush on Joon Park, the male protagonist; she yearns for him to be her “knight in shining armor.” Then, in a strange plot twist, she magically gets sucked into her smartphone and finds herself within “Taste of Love.” There, she meets Seth, played by Justin Chon, who helps her navigate the wonderful world of Korean dramas. 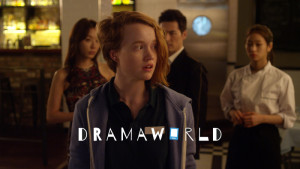 The producers of the show are excited to introduce K-Dramas to a wider audience through the 10-episode series. In fact, “Dramaworld” incorporates both “Korean and non-Korean elements, which were added with consideration to Viki’s “international user base in mind.” Today, 34 percent of its Viki’s viewers come from North America, 23 percent from Europe and 25 percent from Latin America, according to NBC News.

The accessibility of the show sets it apart from other content currently available online. Tammy Nam, the CEO of Viki, believes that fans all over the world will be able to connect with “Dramaworld’s” relatable story, much of which is in English.

“That’s why I’m so excited about it more than anything I’ve done in the last three years because it’s so unique. It really is breaking a mold. It’s an entirely new genre,” said Asian American actor Justin Chon, who is best known for his role in the “Twilight” series.