Walking into the small, chic cafe just off of 29th and 7th Avenue, it’s not hard to see why Soojeong “SJ” Son and Ginny Leise, known as SJ & Ginny, work together well as a comedic duo. Everything from their welcoming personalities to their chemistry and jokes are almost perfectly in sync.

“This is kind of like our secret spot where we like to work sometimes,” SJ says to me as I sit down at their table preparing to interview them about their upcoming improv show.

Their one-act play Great Gig: A Corporate Training For Business, which premiered in November at the Annoyance Theater in Brooklyn and is resuming at the Peoples Improv Theater, also known as the PIT, is a satirical look at the cult-like industry of acting with SJ & Ginny starring as two cult disciples in matching ties. 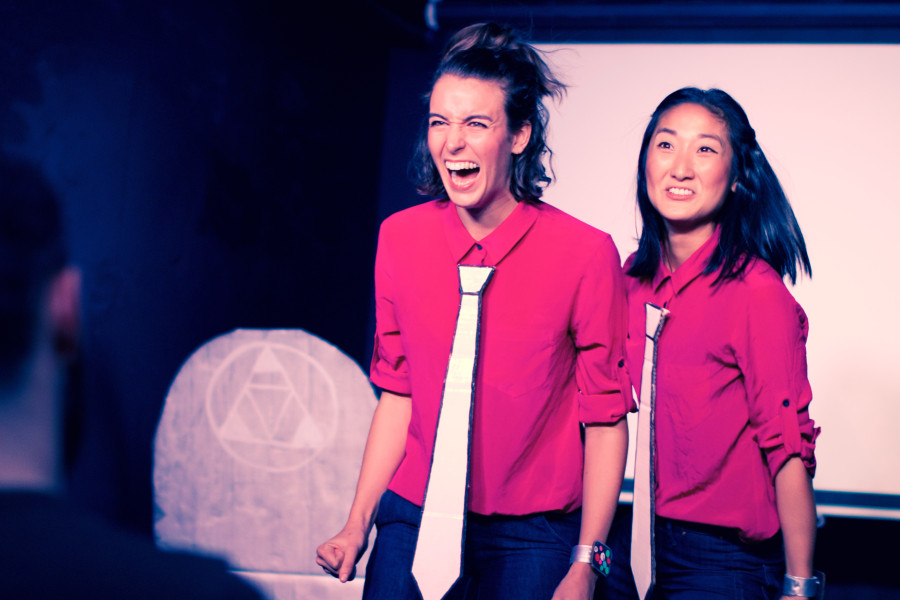 To better understand how SJ & Ginny got to where they are now, they spoke about how they first got into comedy and told their separate stories before converging.

Son, who is originally from Westchester County, attended Cornell University majoring in policy analysis and management. After working for Teach For America for two years in New Orleans, Louisiana, she moved back to New York not long after and worked as an account executive for a while before focusing on acting and taking classes at the Stella Adler Studio of Acting.

“At first, I wasn’t that into doing comedy because I wasn’t sure it was for me,” Son said. “But I saw a friend perform at an improv show and loved it. I signed for classes at the PIT right away.”

Leise, who is originally from New Jersey, went to Colorado College in Denver where she majored in history and philosophy with a focus on identity and eventually moved back to New York and started doing a lot of stand-up and signed up for classes at the PIT where she and Son met and took classes together.

Shortly after, Leise wrote a show titled The Shame Game where she eventually asked Son to join her and become her other half.

“I proposed to her,” Leise exclaimed. “I didn’t want to do the show alone and at the time, we had both quit our day jobs and I knew she was focusing on acting so I proposed to her with a ring I made out of a straw wrapper.”

In The Shame Game which was performed at Union Hall and the Bell House earlier this year, SJ & Ginny revealed shameful secrets every month and asked special guests to do the same. From there, the duo filmed their hilariously absurd web series called HOG: Hearts of Gold that explored similar themes.

In much of SJ & Ginny’s sketches, they tackle issues such as race and feminism. Last year, their video Drive-By Street Harassment garnered over 2 million views on YouTube and shows Leise filming Son yelling obscenities such as “I love your d**k” at unsuspecting men in Bryant Park. The idea for this video stemmed from their frustration of how men catcall women on the city streets.

Son said that building up the courage to do things like that in their videos and sketches was influenced by other prominent comedians.

“I gained that confidence from seeing other women and comedians I admire up on stage who aren’t afraid to perform,” Son said.

“New York City has such an amazing and great community of comedians and performers who are there to support each other,” Leise added.

When asked about whom some of their role models are in the comedic world, both Son and Leise agreed that Tina Fey and Amy Poehler are their inspirations as well as other rising comedian, Greta Lee.

“As a Korean-American woman in the comedy industry, it’s hard to find another young Asian actress to look up to,” Son said. “In Sisters, she plays a nail salon technician but she does it in a way that isn’t stereotypical. It makes me proud.”

Talking about Lee led into a discussion about the lack of diversity in the entertainment industry, a topic which Son and Leise openly expressed their feelings on.

“It’s good to see shows on television now, like Fresh off the Boat, that have people of color as the main characters,” Son said. “But it’s frustrating when you still see a lot of posters in the entertainment world and there’s still a lot of white faces.”

“White privilege is something that is very real,” Leise said. “They need to take a step back and just realize that it is a problem.”

“It’s even a problem within the comedy scene here,” Son said. “So much that there was controversy about it not too long ago where some people quit because some improv theaters weren’t putting people of color on the stage.”

SJ & Ginny said to expect some of those similar themes will continue to be touched upon in Great Gig: A Corporate Training for Business along with plenty of uncomfortable jokes.

“We go through a process when we write and prepare for our shows,” Leise said. “We have a lot of fun but sometimes we have moments too where there’s tears and crying. We worked hard on this one.”

“YEAH, SO COME SEE OUR SHOW, PHONE,” Son yells demandingly into my iPhone.


They spend the last few moments talking about how economics ties in with comedy, how awesome Jennifer Lawrence is, and shared a few fun facts about themselves; like how Ginny’s parents had to use a machine to stop her from wetting the bed as a child and SJ’s tale of her third tooth surgically removed.

After gathering up their things and bundling up, they leave the little cafe to make their way out, ready to take on the city and the world by storm— one fearless joke at a time.

The final showing of  Great Gig: A Training in Corporate Business will take place 7PM this Friday at the PIT located on 123 E. 24th Street. Tickets are $10 at the door. The show is directed by Marina Tempelsman and Nicco Aeed and will include special guest comedian Maria Heinegg.