“My mom had a great plan… I was supposed to be a doctor.”

San Francisco born Jansen Chan, Director of Pastry Arts at the International Culinary Center (ICC), grew up with traditional Chinese family values. Yet, there we were – the divergence in a plotted course, in favor of passion – at a lec-dem combining three unlikely counter-parts: the ICC, Kollaboration New York and two very inspiring chefs, Jansen Chan and Clarice Lam.

My mom had a great plan… I was supposed to be a doctor.

As I found myself surrounded by other yuppies and a buzz of anticipation, I couldn’t help but wonder how these chefs had found their paths.

The evening had begun with a guided tour through the halls and past the kitchens of the ICC. Founded in ’84 by Dorothy Cann Hamilton as the French Culinary Institute, the ICC offers hands on professional, amateur and recreational culinary and pastry programs and boasts some killer alumni: Bobby Flay, Dan Barber (Blue Hill), Chika Tillman (ChikaLicious) and David Chang (Momofuku).

Attendees enjoy their appetizers with some wine complimentary of ICC

At the tail end of this tour we were ushered into the kitchen theater where we were greeted by a spread of Short Rib Sliders, Harissa and Goat Cheese Crostinis, Smoked Salmon Canapés (my favorite), and an assortment of cold cuts, cheese, nuts and pastries, compliments of the ICC’s Pastry Department. To accompany these tasty treats – a curated selection of wine and beer. 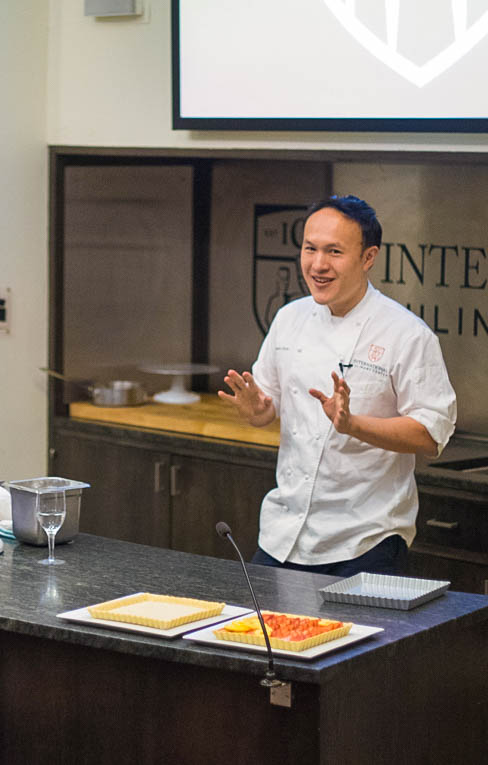 As the evening wore on, stories came to light – personal stories about re-charted courses and new journeys. As it turns out, despite their traditional values, Jansen’s parents supported his creative inclination towards a career in architecture, an interest that he attributes, in part, to his childhood love for Legos.

But after long hours spent drafting on AutoCAD, Jansen missed working with his hands and having a direct impact on his work. He turned to baking, a lifelong hobby, and spent a year working in the culinary world. He studied pastry at the Le Cordon Bleu in France and returned to the restaurants in San Francisco to continue his culinary education.

In the years that followed, Jansen slowly climbed the ladder of restaurants and fine dining. He honed his pastry skills under French chef Alain Ducasse at the Mix restaurants and Essex House, and went on to lead as executive pastry chef at Oceana, New York.

And then, our featured event; in honor of Lunar New Year, a demonstration by former runway model Clarice Lam, baking a fruit tart with 8 auspicious coins. Trust me, you got nothin’ on having been there in real life, to soak in the smells of those baked goods and Clarice’s cheery disposition.

As the owner of Brooklyn based, The Baking Bean, an online business based on delivery that’s often featured at Smorgasburg and pop-up markets across the city, Clarice flooded the room with smiles every time she talked about her business and baking that is often inspired her favorite childhood desserts – “Things that my mom would give me to shut up,” her laughter sends a ripple of chuckles around the room.

If I’m spending this many hours, working for The Man, I might as well do something myself.

While living in Europe, a Mecca for its food culture, rebellious former fashion model Clarice discovered her passion for cooking at the Le Cordon Bleu in Italy and her love for food, particularly Parisian pastries.

She quickly resolved to pursue a career in the culinary arts and soon found herself graduating from the pastry arts program at the ICC – one of the programs we were there to talk  about that evening.

Her repertoire of experiences include Jean-Georges Vongerichten’s Spice Market, Thomas Keller’s Bouchon Bakery and The Chocolate Room where she worked as executive chef.

And then, The Baking Bean was born.

“If I’m spending this many hours, working for The Man, I might as well do something myself.”

Out of a desire to explore her own creativity, Clarice embarked on a journey that she now says lets her take Christmas off  – “and on Thanksgiving I get to eat turkey and not work!”

As Kollaboration’s first culinary arts event, I admit I was glad to hear Clarice’s humility and gratitude for our role as a platform towards “letting people know more about being Asian American and focusing on who we are and not what people want us to be.”

Who we are and not what people want us to be.

Clarice Lam flattening out the dough for her pastry

Resoundingly, if I had to describe the evening in one word, it would be “inspirational”. One can draw many parallels between the culinary exploits of Jansen, and that of Clarice. Courage to start afresh, an eagerness to pursue a career considered unconventional in most Asian families, a fierce determination to succeed in the culinary world and their shared passion for pastries. Their stories were fascinating and I can sincerely say the evening was filling in more ways than one.

Missed the event? We’ve got more coming your way! Subscribe to our monthly newsletter.

Just looking for the fruit tart recipe? We got you covered.