In the summer of 1965, Singapore gained its independence and slowly but surely raised its status from a 3rd world country to one with a booming economy. In commemoration of the country turning 50 this year, Dr. Hong-Ling Wee, an accomplished academic and artist, envisioned a way to celebrate the occasion by focusing on a discipline that does not typically receive a lot of attention, the arts.

Interestingly enough, Dr. Wee did not start her career in this field. After completing her graduate degree, she decided to continue to pursue a PhD because she had yet to discover her passion. Around this time, she also attended her first pottery class, thanks largely to the suggestion of a friend. 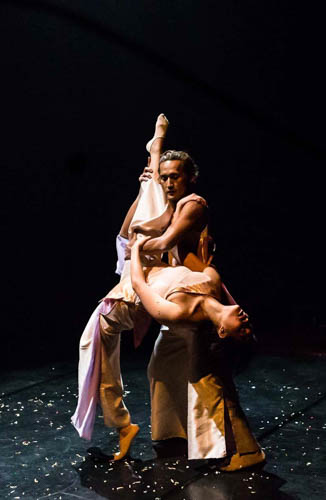 Though reluctant at first, Hong-Ling discovered something about herself through the experience, “The moment I lay my hands on the material, something happened…it felt to me like I walked out of a black and white world into a world of colors…it was as though my brain was waking up from a coma,” she stated.

The event eventually ignited her passion for ceramics and soon enough, more of her time was spent in the studio and less in the research lab.

A while later, Hong-Ling also experienced another life-changing revelation – this time, during a period of tragedy. She was roughly two miles from the World Trade Center when the 9/11 attacks took place. That day, friends and neighbors who went to work never returned.

Her exposure to the impermanence of life eventually made her realize that every moment of it must be seized. Consequently, when Singapore turned 40 in 2005, Hong-Ling saw an opportunity to celebrate the occasion by holding a visual arts exhibition. The event was successful, but due to the challenges that came along with its organization, she vowed never to do it again.

Ten years later, however, Hong-Ling was able to organize Something to Write Home About – a festival, 20 times bigger in size, that brought together all aspects and forms of arts. The event largely served as a way for collaborators and artists from Singapore and the U.S. to celebrate and expose a culture to the masses.

The moment I lay my hands on the material, something happened…it felt to me like I walked out of a black and white world into a world of colors…it was as though my brain was waking up from a coma – Dr. Hong-Ling Wee (Photo by: Something to Write Home About)

When planning for the occasion in June 2014, Hong-Ling had no idea how big the festival would ultimately become. Although she initially focused on the visual arts, friends began contacting her to help, and the exhibition consequently expanded to include everything from literary and visual arts to culinary arts and theater.

This year, Something to Write Home About featured 50 artists and collaborators. No artist was selected as a headliner for the exhibition because Hong-Ling’s ultimate vision was to showcase that individuals are more similar than different. Her own artwork, entitled, “50 Stories,” beautifully encompasses this message. All 50 houses in the piece are different, but as they stand together, none of them seem to stand apart.

Success is your tolerance for failure…if you have a low tolerance then you may never reach success.

Perhaps as a testament to that fact, Hong-Ling states that she could not have organized the festival without the help of the passionate Singaporean community. Through this event, she hopes to build bridges for future collaborations and wishes to see people create their own festivals in their communities. After all, as Hong-Ling notes, a civilization is rarely remembered because of the roads or airports it has built, but more so because of its culture and arts.

Particularly, in a generation that strongly emphasizes academics over the arts, Hong-Ling leaves emerging artists with this message: “Success is your tolerance for failure…if you have a low tolerance then you may never reach success.”

Olivia Veizas is a producer for Kollaboration NY and a freelance production assistant. She is always on the search to learn new skills and enjoys storytelling. Olivia is also a cat lover.