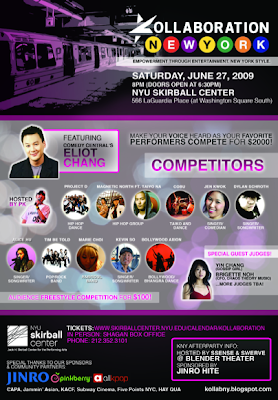 Kollaboration NY is almost 2 weeks away and we can’t be more excited about the show! Not only is there going to be an off-the-hook lineup of competitors, but there will be FREE Pinkberry served before the show and FREE drinks at the afterparty sponsored by Jinro Hite! Furthermore, allkpop is coming to you live at the show! Be sure to check out their site as they hold it down with all the latest details and features! Does it get any better than that?? Well it does if you’re a fan of the CW’s Gossip Girl! Yin Chang or “Nelly Yuki” has signed on a guest judge, along with Brigette Noh, the CFO and Co-Founder of Chaos Theory Music.

ANDDD if you haven’t heard already, Eliot Chang (who by the way, made Comedy Central’s HOTLIST 2009) will be headlining the show! This guy is not only hilarious but a die-hard New Yorker, so show some love to your homegrown talent! Check out some of Eliot’s stand up below (disclaimer: some inappropriate language used):

Check back regularly as we will be having competitors’ spotlights throughout the next couple weeks. Get to know your favorite performer and root them on at the show! Your screams and cheers will help determine who will win the grand title of New York’s premier Asian American performer!!!

But wait! The night doesn’t stop there! After the show, come party the night away with us at the official KNY afterparty at Blender Theater presented by Ssense and Swerve. The party will be directly after, so save yourself some time and come to the show in style! 18+ enter, 21+ drink.

VIP tickets are nearly sold out and general admission tickets are quickly going everyday! Don’t wait till the last minute, purchase them online, in person at the Shagan Box Office (NYU Skirball Center) or by phone 212.352.3101. NYU Student discounts ARE available and tickets will NOT be sold at the event! Get them now!