On a Sunday evening in early September 21-year-old Katie Schreckengast, Miss Pennsylvania, was walking across the Miss America stage in a vibrant red gown – every flow and step of her carefully rehearsed gait airing nationally on television. This was right after passing through the swimwear portion in the only full-piece swimsuit amongst the finalists. Following her talent, a jazz rendition of Listen on her alto saxophone, fans on Twitter were gushing over her performance, which wa quickly curtailed once she did not move onto the next round. But, Schreckengast ultimately landed a spot within the top ten, a huge accomplishment.

Long before her on TV appearance, a bulk of the Miss America competition was going on behind-the-scenes. In a press conference style interview with judges Schreckengast was asked, ‘If you were to become Miss America, what would be one of your biggest challenges?” Her answer was “Racism, and the comments I receive online.” She knew this because she had dealt with a little bit of it after she won Miss Pennsylvania this summer.

But in the 24 hours following the Miss America competition, Schreckengast was still shocked by the scale of directly racist social media comments.

“About the size of my eyes, about the way that I smiled,” says Schreckengast, “Those are things that on a day-to-day basis I really don’t hear ever. So seeing the other side of it, having that kind of national exposure, understanding that racism still is very real and prevalent in our society today was a bit of a wake up call for me.” 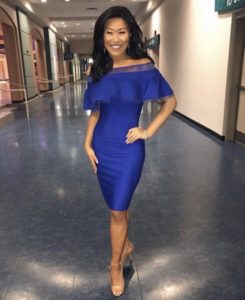 In the same interview, Schreckengast talked about Nina Dalvuri, a judge this year who was Miss America 2014 and the first of Indian descent. Dalvuri was also the target of xenophobic and racist social media posts immediately after she won. Sadly this is nothing new to America’s oldest pageant, similar events occurred after Vanessa Williams was crowned in 1984 and after Bess Myers became Miss America 1945.

“After talking to my family and my friends. It’s just more of a motivator to me than anything else… It’s really a reflection of the people who are spreading those comments – not of me,” says Schreckengast, “It goes to show the importance of my platform and the importance of putting myself out there to be in that vulnerable position.”

Every Miss America system contestant has a platform of their choosing – similar to what a politician when they run for office. Schreckengast’s Miss PA platform, Building Families Through Adoption came from reflecting her her own personal story of adoption once she entered college.

Schreckengast was adopted from South Korea when she was 6 months old. She grew up in Palmyra, Pennsylvania with her parents Randy and Lori and younger brother Zach. Her town is pretty small, with a population of 7,500 in a little less than two square miles. Schreckengast’s high school graduating class was about 200 kids, most of whom she had grown up with since kindergarten.

It wasn’t until college that Schreckengast recalls being outside of what she calls “her hometown bubble” for the first time. When asked “where are you from?” Schreckengast’s natural and immediate response is, “Palmyra.”

It was at Penn State she faced frequent questions about her identity and family, something she had not dealt with back in Palmyra.

“I was not faced with those kinds of questions on a daily basis – Where are you really from? Is your brother your real brother? – People knew who I was. They knew who my family was (in Palmyra).” says Schreckengast.

She felt nervous to talk about it. But it opened the door to talking about her adoption story. She even wrote about it in blog posts. Schreckengast began to learn more about international and domestic adoption as she began to form her Miss Pennsylvania platform message: being in an adopted family doesn’t make it any less of a family.

Her message also stands to go against one of the common stereotypes of adoptees. Growing up, Schreckengast often saw the same version of an adoptee story in mainstream media. Stories about the adopted child “that felt like they were missing something, that there’s a hole in their heart that can only be fulfilled by their biological parents.” She wanted to be a voice for those adoptees who felt fulfilled, “completely loved and at peace with their journeys to be with their forever families.”

For the rest of her year as Miss Pennsylvania, Schreckengast’s hopes to blog all the shared stories from adoptees and families she meets during her appearances and from messages she has been been receiving from around the world.

“I’d love to have sort of like an archive of these stories that I can share with people, but also that I can look back at after my year,” says Schreckengast.

Sonah Lee is a journalist in New York City and has lived in upper Manhattan since 2014. She attends Columbia University's Graduate School of Journalism for her master's degree while working full-time in the field of federal procurement. Sonah loves to bike commute in the city year-round, is obsessed with NewYorkDog on Instagram and can teach you how to tackle someone properly.