Trying to find the time to cook as a busy professional in a big city can be tough to balance.

And it’s even tougher when you’re far away from home and craving your family’s homemade Asian cooking from time to time.

Wu said the idea for starting Nomz stemmed from a dissatisfaction with greasy take-out stuffed with salt/MSG and the nostalgia he felt for his mother’s homemade cooking when he lived in Bowling Green, Ohio.

“Growing up, whenever my mother crafted her delicious Asian noodle soups, she always prepared huge batches,” Wu said. “A significant portion of each batch would be frozen into individual containers for the future, giving the family a quick and easy meal option available anytime. All we had to do was heat and eat, and serve with fresh noodles. After speaking to my friends, I discovered many of their parents had similar habits. When we realized there existed a significant and mutual desire for restorative and accessible Asian recipes, Nomz was born.”

In 2013 while Wu was working in Ann Arbor, MI, a friend informed him about Taiwanese American Professionals of New York (TAP-NY) and its annual Entrepreneur Challenge & Competition (“ECC”), a business plan competition which awards individuals a grant to pursue their ideas. Fueled both by an addiction and conviction for his mom’s convenient frozen Asian soups, Wu decided to leverage his undergraduate business degree from the University of Pennsylvania and apply for ECC.

Wu applied to ECC with a 15-page business proposal and successfully advanced in the competition. Several weeks later, he flew to New York to present to a crowd of over a hundred Asian Americans on how Nomz would be the meal solution to their busy and fast-paced lives.

Although Asian Americans are a fast growing and successful demographic, Wu feels the population is still underserved by what is available at the Asian aisle of local grocery stores. For him, products are mostly divided between General Tso-type recipes for mainstream America or imported foods that contain unreadable foreign branding, unfamiliar ingredients and high levels of both sodium and preservatives.

“I felt the grocery market was missing a relatable, single language Asian brand that retains our traditional palate yet incorporates preferences that may differ from those of our often cost-sensitive immigrant parents such as higher quality ingredients and no added preservatives,” Wu said. “In addition, America, particularly in multi-cultural cities such as New York, is growing more adventurous with its taste buds. There is an explosion of interest in ramen and food shows that explore diversity such as Anthony Bourdain’s “No Reservations”.

Ultimately, the crowd fell in love with the idea of Nomz and TAP-NY granted him with $1,000, which he saved for the future.

In early 2015, Wu moved to New York City to further pursue and explore his dream of turning Nomz into a business. It was through another TAP-NY event, a book signing for Taiwanese American author Cathy Erway, that Wu met Lee who would become his partner in co-founding Nomz.

Wu and Lee craft the soups themselves in a shared commercial kitchen in Red Hook, Brooklyn. They have an adorable office corgi named Bao who provides motivational encouragement at home. 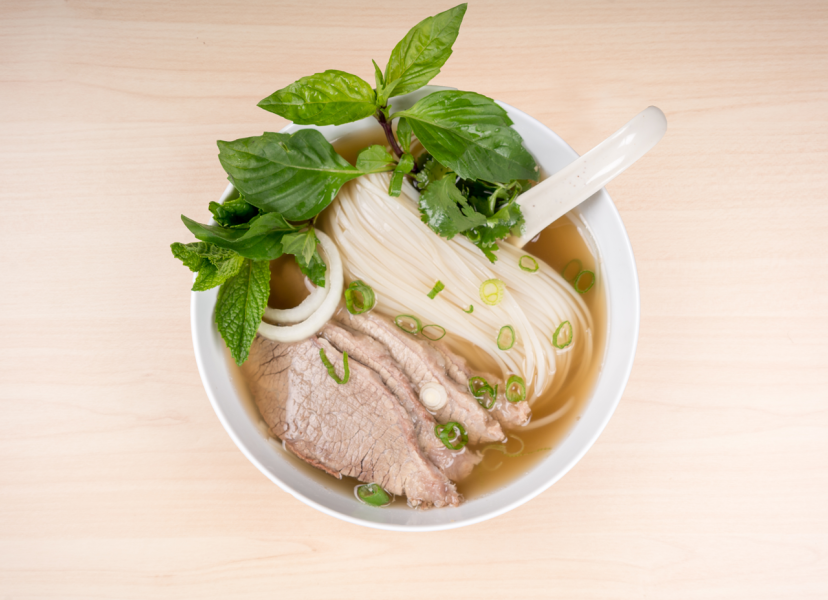 “Our soups are based on a combination of family recipes, fellow Asian Americans who share their memories and recipes and primary research guided by cookbooks and online sources,” Wu said. “The Chinese Chicken Shiitake Mushroom soup is from my mother. It hasn’t changed materially from what her family has followed for decades except we use more expensive ingredients since nobody used or even heard of organic ingredients in the ‘80s.”

Nomz soups go for $8 a bowl including delivery and tips. As of publishing, there are two flavors are available: Chinese Chicken Shiitake Mushroom (Xiang Gu Ji Tang) and Vietnamese Beef Pho (Pho Bo). A third, Korean Oxbone Soup (Sul Lun Tang) is under development. Delivery is currently limited to Manhattan.

If you are interested in joining their team or trying the Nomz soups yourself, visit their website for more information. They are also holding a raffle until the end of this week to win a two-month supply of their wholesome Asian soups. Nomz!