Remembering Twinsters and how it brought two sisters together

On February 26, 2013 Anais Bordier, a French student of Fashion Design at Central Saint Martins in London, UK, stared in amusement. While one window of her Skype video call streamed the contents of her own webcam, from the other gawked an all too familiar face, one that shared an uncanny likeness to her own.

“I was feeling very relaxed,” remembers Bordier during our interview last year, “because I’d seen a number of her videos on YouTube.”

That familiar countenance had belonged to Samantha Futerman, an American actress popular for her portrayal of Satsu in the critically acclaimed film, Memoirs of a Geisha.

“When I saw her appear on the screen, I could see we were very similar,” recalls Bordier. Not only did she share a striking resemblance to Samantha, the duo even shared the same birthday: November 19th 1987.

Anais Bordier and Samantha Futerman document their discovery of how they were twins separated at birth (Credit: Twinsters)

Bordier, an adoptee from Holt International Children’s Services, was born in Busan, South Korea, as Kim Eun Hwa. She was raised an only child to her adoptive parents in Paris, France, and for her, growing up was often a lonely affair.

“It’s not like I had a brother or sister that could distract their [parent’s] attention,” Bordier said. “So I couldn’t say ‘yeah but my sister did worse [at school]. I didn’t have that.”

In December 2012, Bordier’s friend, Kelsang Dongsar, stumbled upon KevJumba’s YouTube video titled High School Virgin. On seeing the similarities between Bordier and the actress in the video, Kelsang thought it was bizarre.

“She’s quite sassy on the channel,” Bordier recalled. “I remember thinking ‘I don’t know if that’s really her or if she’s acting.”

It wasn’t until later, when Kelsang saw the trailer for the movie 21 & Over that Bordier was able to get a hold of her doppelgänger’s name, Samantha Futerman, who she discovered was also adopted. After spending a few hours pondering with friends on whether to contact Futerman, Bordier eventually reached out through Twitter.

Bordier succeeded in directing Futerman’s attention to a Facebook message and in February 2013, the two women spoke to each other for the first time through Skype. 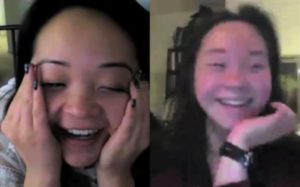 One of Bordier and Futerman’s many Skype sessions (Credit: NY Daily News)

“She [Samantha] was so cute, calm, and soft,” Bordier said. “She was being really nice. I was scared she would be a little bit Hollywood.”

“I didn’t know her yet and hadn’t met her [in person], but I immediately trusted her,” Bordier added. When Futerman talked about documenting their Skype video calls and the events that would play out, Bordier was up for it. From there, the conception of Futerman’s documentary Twinsters (which premiered at SXSW at Austin, Texas, last July) began and two months later, DNA test results confirmed that Bordier and Futerman were identical twins.

“Twins are definitely mysterious,” Bordier said and alluding to twin intuition. “It goes further than just words. I don’t need words to understand what Sam is feeling.”

Bordier reminisced the times when Futerman and herself would naturally respond to a question either in the same way or with the same expression, as well as act in an exact fashion at the same moment without really thinking about it.

“Our mannerisms are the same,” Bordier said.  “It’s quite fun because we’re doing it naturally without thinking about it and it just happens and [when it does] it’s a little scary.”

Bordier said even though they both look the same, their personalities are different. She says that Futerman is much more expressive, while she is more reserved. She believes this to be because of where they grew up and to the relationships they had with their siblings, and the lack thereof.

At first when we met we were looking for the similarities,” Bordier said. “We react in different ways because we’ve been raised in different environments.”

Once referring to Futerman as “that girl who looks just like me on the YouTube video” to “my sister”, Bordier said it didn’t take long for the two of them to become real sisters.

“When I would first talk about her I would describe her as – the girl who looks just like me on the YouTube video.” Bordier said. “It wasn’t until after they’d met in person that, “I was talking about Sam and said – yes my sister, and she [friend from class] just looks at me and says – that’s the first time I heard you say sister.”

“Meeting Sam was the best thing ever,” Bordier said. “It’s been so fun.”

Since the documentary’s release last summer, Bordier has been working as a designer at Jean Rousseau, while Futerman co-founded The Kindred Foundation, an organization that strives to provide international and domestic adoptees, and their families with services such as travel, translation, and support for those who wish to reunite, alongside friend and Glee actress, Jenna Ushkowitz. In April, KNY had the pleasure of attending Kindred’s gala. To see Bordier and Futerman’s full journey, you can stream Twinsters on Amazon Video, Vudu, YouTube, iTunes, or Google Play.