Get ready to spread some colors and share the love because it’s time to welcome spring and celebrate the Holi Hai Festival.

This spring festival, known to many as the “Festival of Colors”, originated as an ancient Hindu religious festival is primarily celebrated in Indian, Nepal and other regions of the world where there is and where Hindu is practiced, but gained popularity through the years with non-Hindus in many parts of South Asia, and the rest of the world including Europe and America.

The story behind why Holi is celebrated comes from the Hindu theology of Holika, the was the evil sister of the demon king, Hiranyakashipu, who was immune to fire. Legend has it that King Hiranyakashipu received a blessing that made him indestructible resulting in him becoming arrogant and expecting everyone in the land to worship him. His son, Prahlad, disagreed with his father’s ways and instead devoted himself to Lord Vishnu, the deity known for being a preserver and protector. Holika, Prahlada’s aunt, attempted to trick Prahlad into sitting on a pyre. However, her sneaky plan backfired and she became engulfed in the flames while Prahlada survived with the protection of Lord Vishnu who defeated King Hiranyakashipu. The bonfire is a symbol of the victory of good over evil. 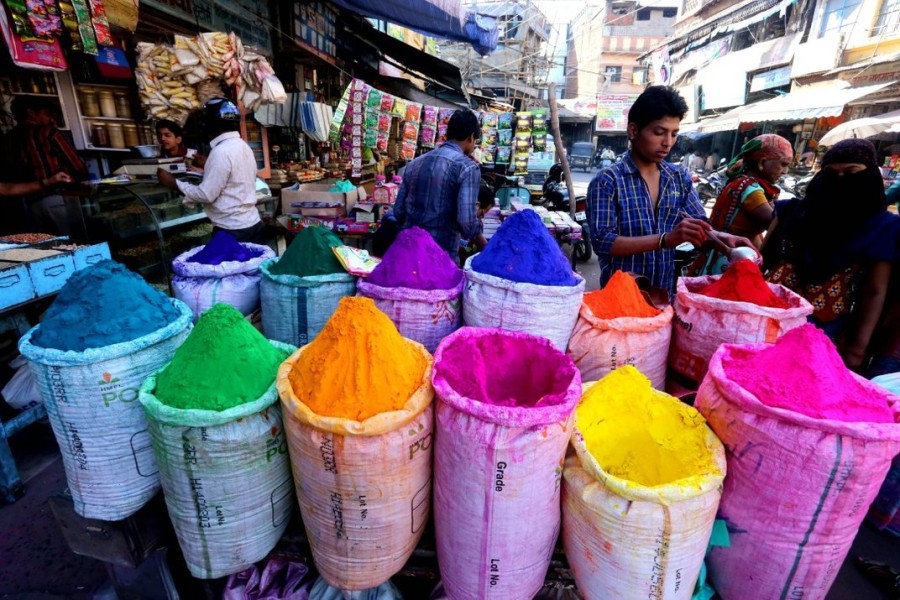 Powdered colors are displayed in India in preparation for the festival. (Photo credit: Sanjeev Gupta)

The colors came from another myth about the unbreakable love between Radha and Lord Krishna, who used to worry about the color of his skin since his complexion was much darker than Radha’s. His mother suggested he color Radha’s face with any color he wanted, suggesting to him that their differences were only superficial. The idea fascinated him and he colored her face in various colors and their love was born. 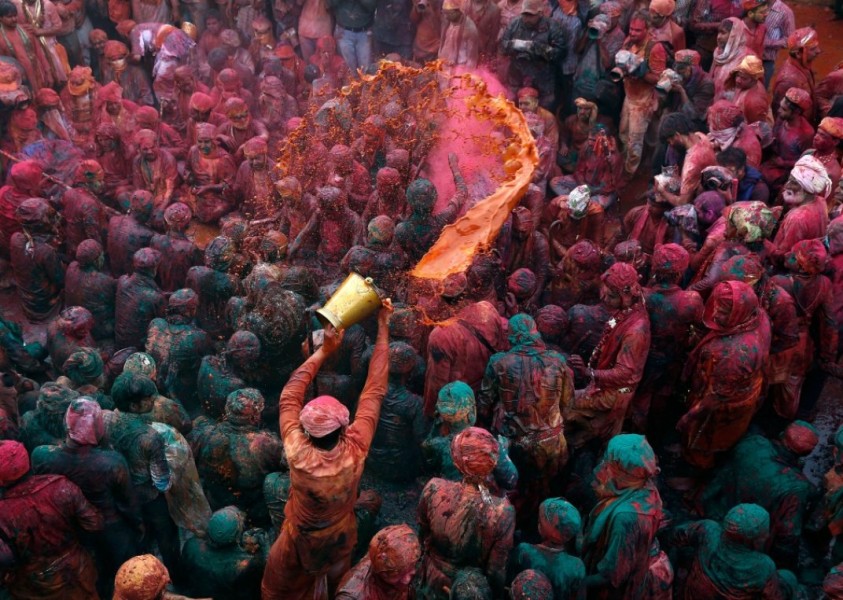 A man throwing colored water on a crowd of people in India to celebrate Holi (Photo credit: Ahmad Masood)

Traditional celebrations start on the night before Holi with a “Holika” bonfire where people play music, sing, dance and party. When the ashes fade the following morning, the day begins with a free-for-all carnival of colors where people chase each other around while throwing colored dry powder and colored water, with some choosing to use buckets, water guns and even water balloons.

To honor this joyous holiday, the NYC Bhangra Dance Company & School is hosting their 7th annual Holi Hai Festival at the Dag Hammarshkojöld Plaza on Saturday, April 30th from 11 AM to 6 PM. You have to register, but admission is free.

There is an opportunity for dancers and bands or musicians to apply to perform at the festival. You can read the guidelines and fill out an application here. The deadline to turn in an application is March 20th at 12 PM.