The “Unstoppable” wave that is Angela Lee

Along the central part of the North Shore, on the Island of Oahu, lies Waimea Bay. To the casual observer it’s scenic backdrop stands out in typical Hawaiian Island regal splendor. Tropical green forestation pilfers its way around the edges, while the crystal clear blue waters of the Pacific Ocean merge into the pearly white sands of a seemingly neverending beachfront.

“All the friends and family gather there, and people can jump off the huge rock.” explains long time resident of the island Angela Lee. “It’s just a really awesome place to hang out. Its my favorite.”

What is not so typical of Waimea Bay, are the occasional behemoth sized waves that can be the prerequisite for some of the most irrationally extreme surfing competitions in the world. In fact, the bay has been immortalized in the 1963 Beach Boys song Surfin U.S.A. and the hit TV show Lost. 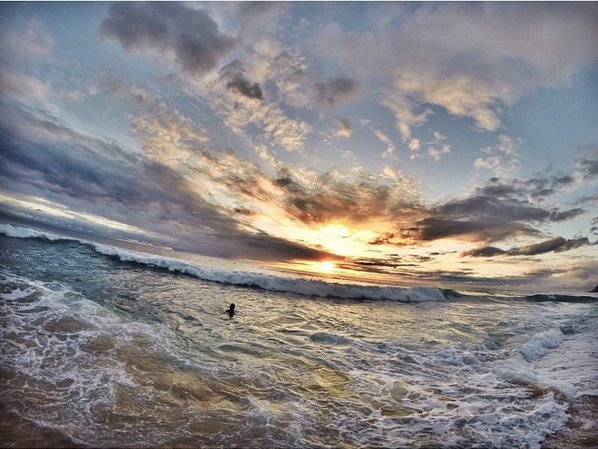 Angela Lee out on the waves (Photo by Angela Lee)

“In the winter the swell is really big over here, and I’m not really a good surfer,” says Angela. “I surf sometimes, but I don’t go out there when it’s too big ― like 8-10 ft ― I wouldn’t risk it. But in the summer it’s really nice. It has mellow tides.”

At just nineteen years-of-age, Angela stands at an unassuming 5 feet 4 inches, and is currently listed at a “strawweight” like 115 lbs. Stretching vertically along her right shoulder blade, lies a trio of meticulously placed Chinese character’s, offering evidence of a freshly inked tattoo ― and an American teenager whose starting to carve out her natural identity.

Much like the shifting of the seasonal ocean tides in Waimea Bay, young Angela Lee’s life is in the midst of dramatic change.

Apparently, she also enjoys bending grown woman’s elbows in painful maneuvers until they frantically signal to a referee. All within the confines of a circular metal cage, and to the thunderous applause of a deliriously exuberant audience. And that was just the scene from her debut professional Mixed Martial Arts fight, in her father’s native country of Singapore, for ONE Championship last May 22nd.

In the mid-1990’s, Ken and Jewelz Lee were a young newlywed couple living in Vancouver, Canada who shared a deep rooted passion for mixed martial arts. Jewelz had been training since elementary school in taekwondo (태권도) and hapdosool (합도술), another Korean defense system invented by her father who was a grandmaster. Ken grew up in a martial arts family and started learning taekwondo at five years old, at the behest of an uncle who ran his own training school. In 1996, they decided to make the transition from training and competing ― to primarily teaching and coaching ― by opening their own martial arts school. In addition, they decided to make the commitment to starting a family and had their first of four children, Angela.

“When we had Angela, we already had the school, so she was always on the mat.” said Ken Lee. “She was very coordinated, and she was very very strong actually. She was always training with the boys.”

With her destiny in the family tradition of mixed martial arts seemingly a foregone conclusion, Angela would ascend quickly to competing at national levels in judo by the age of seven-years-old. In the same year, Angela’s family would move from Vancouver to a small town called Mililani on the Island of Oahu.

“When we moved to Hawaii, it was just my little brother, my mom, dad, and me.” said Angela. “Growing up here was kinda like paradise ― it was such a switch in environments from Canada to Hawaii. I really love Hawaii. Its home for me now.”

In Mililani, which has a population of around 30,000, Angela and her younger brother Christian would develop a fighting reputation that seemingly intertwined with one another. Throughout their childhood they would acquire a plethora of mixed martial arts belts and collect various titles in a number of fighting disciplines.

“They both won the most outstanding athlete at the world championships for both boy and girl. So it’s really special that they get to do this together.” said Ken Lee.

WAIPAHU, HAWAII – AUGUST 18: (L-R: Angela, Jewelz, Ken, Christian, Adrian, & Victoria Lee) “Since we have our own family gym, we [my brother and I] actually help coach the kids there. It definitely helps to keeping an eye on my little brother and sister to try and show them the way.” – Angela Lee (Photo by Kyle Wright/@kyleaddisonwright Instagram)

Christian, now 17, has managed to win six junior world championships, and is just a year away from pursuing his own professional MMA career,.

“Hopefully, he will be fighting in the same organization as me.” said Angela. “We’re hoping to be the first brother and sister fighter’s out there. There has always been brothers, but not a brother-sister.”

While it’s natural to often compare the two rising sibling fighters, they also found ways to carve out their individual niches. When Angela was 15, she competed at the United States nationals in Mixed Martial Arts and Pankration ― a toned down version of MMA with more rules suitable for youth. She would go on to win the junior girls division in Pankration, but then rather ambitiously ― also bested the field in the adult women’s MMA division.

Furthermore, as a junior at Mililani High School, she casually walked on to the wrestling team and promptly won a high school state championship in her first year of competition. However, out of all the accomplishments and accolades to date, her first world championship as a junior, may forever be enshrined as her family’s proudest memory.

“It was an incredible moment for us as a family,” said Ken Lee. “There were over 40 countries competing, and to have her walk out with the team ― while the national anthem played ― was just an incredible experience.”

For now, Angela is the only professional fighter in her family, and her next fight has been scheduled at the Dynasty of Champions in Shanghai, China for September 17th. She will face off against a little known 20-year-old Russian kickboxer Elena Pashnina, who has a paltry ONE Championship record of 0-2. In Angela’s critically acclaimed debut, she made short work of another kickboxer, Egyptian Aya Saber, by armbar at the 1 minute and 43 second mark.

Now in her last four fights, including as an amateur, Angela’s record looks like this:

Judging by the score card, some obvious themes seem to be developing:

“The reason why I’ve been finishing by armbar is because I like to take the opportunity when I see it,” said Angela. “And a lot of times girls just leave their arms out, and it’s the first thing I go to. Sometimes its harder to choke them out, or just punch them out. It takes a lot more time, and I like to finish the fight as fast as I can.” 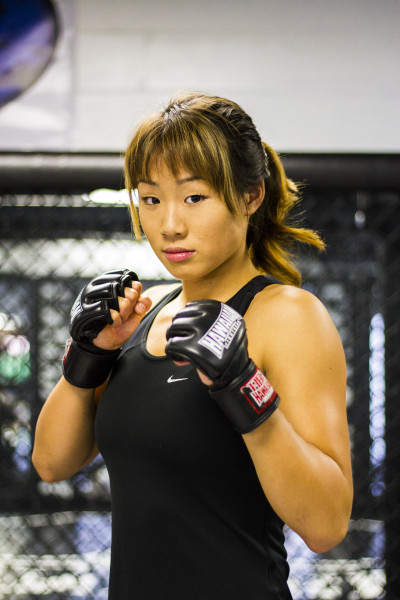 WAIPAHU, HAWAII – AUGUST 18: “I did suffer a fractured collarbone, when I was wrestling in high school, but that was the only injury I think I’ve ever had.” – Angela Lee (Photo by Kyle Wright/@kyleaddisonwright Instagram)

Coach seemed to agree. “Angela is what everyone wants in a fighter. She is very purpose driven. She doesn’t like to mess around. She likes to go in there and finish the fight.” said Ken Lee.

Many ONE Championship fans may be wondering when the much anticipated showdown with widely celebrated Malaysian fighter Anne Osman will happen. Angela’s debut match in ONE Championship was scheduled to be against Osman, but was canceled at the last second in February of this year. Intriguingly, both Osman and Angela share victories over the previously mentioned Aya Saber, which Osman defeated in October of 2014 via TKO by elbows.

“I wanna be the youngest MMA world champion.” said Angela. “Hopefully I can get that title shot and that belt by the time I’m 20 next year. I also wanna be the first women’s ONE Championship fighter ― and there isn’t one yet ― so I’m hoping to fight for that shot.”

Mixed Martial Arts is routinely recognized as the fastest growing sport in the world, and the popularity of women’s MMA has seemingly risen to crescendoing levels in both Asia and North America. However, even with the bar being set higher and higher for women’s competition, there are still gender hurdles that face even the most promising of athletes.

Angela also acknowledges a strong relationship to her cultural heritage ― even citing Dragon: The Bruce Lee Story as an inspirational childhood movie. But as her notoriety spreads, natural identity quagmires have magnified as the clamor for her services of representation increase.

“I know she has been catching a lot of slack from growing up in America. But that doesn’t change her ethnicity.” said Ken Lee. “We’re Singaporean and Chinese and she is very proud of it. She is also very proud of her Korean roots as well. We’re really really happy that she has embraced it. She feels proud to be of Singaporean descent and represent Singapore in ONE Championship.” 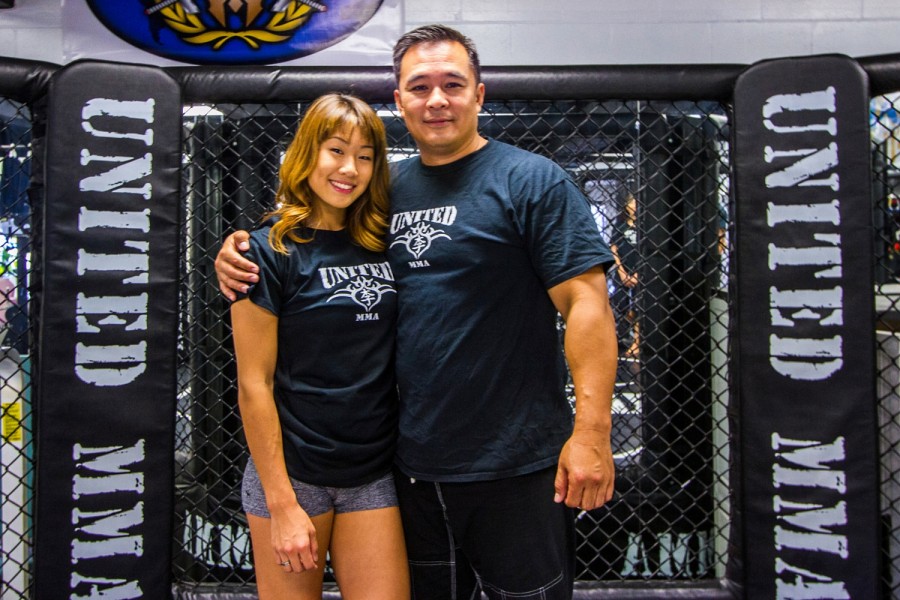 WAIPAHU, HAWAII – AUGUST 18: “It’s always hard. Before I’m a coach, I’m a dad.” – Ken Lee. “He is very traditional in the values he teaches me, and it’s just to be a good person.” – Angela Lee (Photo by Kyle Wright/@kyleaddisonwright Instagram)

While Angela’s father performs an abundance of visible roles in her life ― such as coach, mentor and publicist ― she is quick to emphasize the importance of her mother in her journey.

“My dad is my coach, and he is the disciplinarian.” said Angela. “ But my mom has always been very supportive and very encouraging. We’ve always been best friends. She has always been the one I can go to and cry to. She has been my supporter through all of this.”

With her professional fighting career continuing to progress at an outwardly rapid pace, Angela has learned to rely on old instincts to overcome new challenges.

“When I stepped into the arena in Singapore, I was just amazed and in total shock of how many people were in there.” said Angela. “It was such a bigger scale. But when you get in the cage, it’s the same thing. You have an opponent in front of you and you have to finish. “

Lee continued, “We’ve been training in MMA as a whole, for a lot longer than I believe my competition has. Just now people are starting to really put together all these different ranges of combat. So that’s where I think I have the upper hand.”

As the last traces of teenage awkwardness are seemingly disappearing into the cool confidence of a young adult ― we are made aware of its final transformation.

“Defend my championship belt ― be undefeated ― those are the goals in mind for the next five years.” said Angela. “And retire undefeated.”

Yes, the unmistakable confidence of a supremely talented nineteen-year-old who has the world as her oyster. For the rest of us, we will just sit back and enjoy the “Unstoppable” wave that is young Angela Lee. 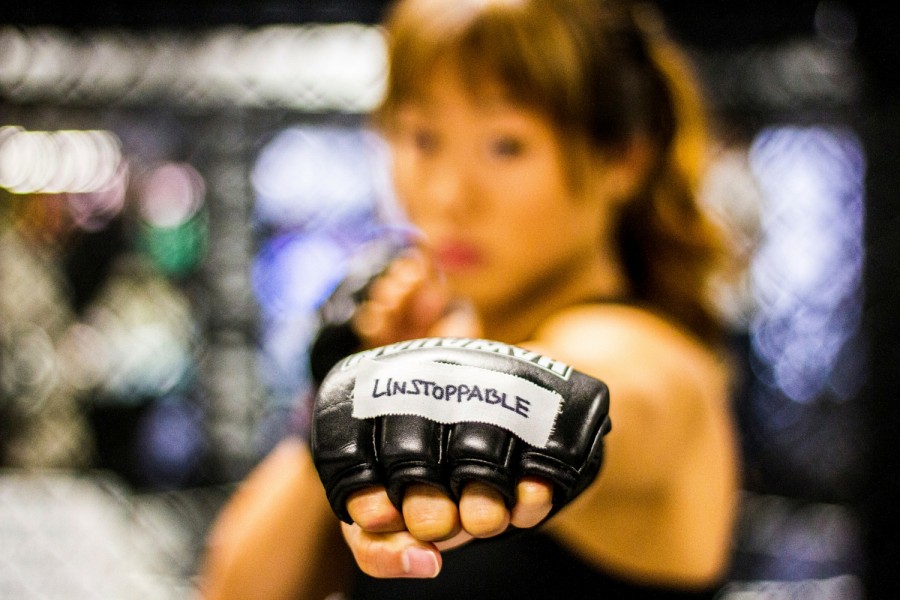 WAIPAHU, HAWAII – AUGUST 18: “I needed this new wallpaper for my Facebook, and there was this wallpaper that said “Unstoppable” ― which I thought was pretty cool. Naturally, people just assumed that was my nickname and it just kinda stuck with me.” – Angela Lee (Photo by Kyle Wright/@kyleaddisonwright Instagram)

***Editor’s note: updated at 5:49 PM EST to change the date for Dynasty of Champions event in Shanghai, China to September 17th.